The Caribbean Export Development Agency (Caribbean Export), got CREATE-ive when it launched its latest publication, aptly titled ‘CREATE’, a publication which applauds the successes of entrepreneurs in Caribbean creative industries. Appropriately, the launch of the publication occurred in synergy with the CALABASH International Literary Festival Launch at the Red Bones Blues Cafe, Jamaica on Thursday March 20th, 2014. 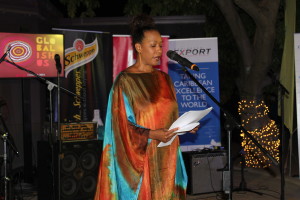 The creative industries continues to be recognised as a significant contributor to growth and development in the world economy and can become a pillar for economic diversification and catalyst for export growth in the Caribbean.  The creative industries represents a dynamic sector that encompasses disciplines ranging from traditional arts and crafts to multimedia.  The CREATE publication showcases only a microcosm, albeit impressive collection, of entrepreneurs from the music, film, fashion and creative design industries.  The Agency’s Executive Director Pamela Coke-Hamilton set the tone for the publication at the event with an engaging and unconventional speech which spoke to the vision behind the publication and the impetus for the partnership between Caribbean export and CALABASH.

Since 2001, the Calabash International Literary Festival has become the premier international literary festival in the English speaking Caribbean that not only features writers from the Caribbean and around the world, but also musicians and provides a market for carefully selected artisans to sell their products to the large attending audience over the 3 days.  Caribbean Export has partnered with the organizers of Calabash to leverage this established platform of the arts for CARIFORUM artisans that are seeking to enter new markets and be part of a Design Caribbean stand at the festival.

Calabash provides an opportunity for regional artisans to network with international and Caribbean attendees who visit the festival in order to generate further interest in their products. Caribbean Export recognizes that regional artisans are seeking new avenues and opportunities for market entry and penetration and it is therefore envisaged that Calabash will provide an outlet for the achievement of this goal which is scheduled to take place from May, 30 – June 1, 2014 at  Jakes in Treasure Beach, Jamaica. 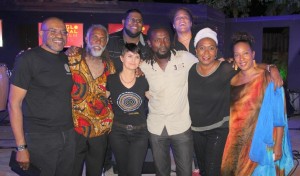 As part of the launch event, patrons were entranced by the captivating rhythms of Xiomara Fortuna, a recording artist from the Dominican Republic who features in the CREATE publication. Fortuna’s music is a unique fusion of various Caribbean indigenous forms which, in its essence, encapsulates the vision of a unified region which Caribbean Export upholds.

“We see our role, made possible by the 10th European Development Fund as giving structure and support through opportunities and exposure in publications like CREATE and at events such as Calabash, and for creative talent across the region to become strong exportable products for the rest of the world to embrace” commented Pamela Coke-Hamilton, Executive Director, Caribbean Export.